OpenSea Refunds: What Can You Do?

Or perhaps you’re one of the many victims who lost their NFTs due to active yet invisible listings on OpenSea?

Or even worse: Did you receive a phishing email from a hacker who subsequently stole all your NFTs?

These are just a few of the horror stories that have been plaguing many NFT investors in the past few weeks after hearing about all of the people who lost Bored Apes and other NFTs worth fortunes.

In this article, we’ll take a closer look at how OpenSea is dealing with all of the complaints and whether they’re applying different standards depending on the victim’s public influence when it comes to OpenSea refunds.

So let’s dive right in.

OpenSea Refunds: What Can You Do?
Here’s the answer. Great article by @ChrisHeidorn from @Tokenized_HQ here: https://tokenizedhq.com/opensea-refund/

Can You Get Your Money Back on OpenSea?

Unlike most eCommerce stores, you cannot simply return the item you have purchased. OpenSea only acts as a broker and facilitates transactions between buyers and sellers. The NFT market is risky and unregulated, thus leaving investors without any legal basis for returning items due to buyer’s remorse or other reasons. Therefore, NFT investors are mostly accountable for their own decisions, no matter whether good or bad.

Usually, when we buy stuff online, we know that we’ll be able to return the item if we don’t like it or if it’s broken in some way.

Most customer-centric eCommerce businesses have adapted this approach in recent years since Amazon kept pushing forward with more and more customer-friendly policies.

This strategy has helped the eCommerce behemoth consolidate much of the retail demand.

And let’s be fair, buyer’s remorse is something that already existed before and most retail stores were happy to take your returns as long as the item was in decent condition.

Unfortunately, it also means that many inexperienced retail investors have come to expect an extremely high level of consumer protection.

Probably more than most consumers even deserve.

The problem is that many NFT investors do not understand that there is a fundamental difference between buying stuff on Amazon and buying NFTs on OpenSea.

Although we can debate whether OpenSea is actually decentralized or rather a centralized Web2 entity posing as a Web3 platform, the fact of the matter is that NFT transactions on its platform mostly happen in a decentralized way.

That is also why we’ve tried to explain to our readers that there’s no such thing as an OpenSea wallet.

OpenSea is decentralized in the sense that blockchain transactions cannot simply be reversed.

Whatever happens or goes wrong, simply cannot be rolled back because the blockchain is effectively tamper-proof.

OpenSea effectively only acts as a broker between buyers and sellers.

And once you’ve decided to purchase something, there’s no turning back.

So while buyer’s remorse may still be a thing, unless the seller is willing to reverse the transaction, you’re stuck with your purchase.

It’s important for NFT investors to understand that they are investing in high-risk unregulated assets.

They are not buying consumer goods in an online store.

Now, that doesn’t mean you can’t necessarily get your money back via OpenSea refunds.

However, it really depends on whether a legal case can be made that OpenSea somehow made you lose money due to their negligent behavior.

There have been some cases in recent months were owners of Bored Ape Yacht Club NFTs lost their tokens and in some cases OpenSea refunded them.

However, given that many of these cases were primarily the fault of the users themselves, it looks like OpenSea acted primarily in order to avoid negative PR.

No, there is no official OpenSea refund policy. While there are known cases where OpenSea has paid large sums of money to certain users of the platform, it’s not clear whether they can or should be considered “refunds”. It is more likely that they were a form of extrajudicial settlement meant to avoid reputational loss.

A lot of retail investors are quick to think that there must be some sort of OpenSea refund policy when they believe they have lost money for illegitimate reasons.

The problem here is that many people who have been attracted by NFTs are not necessarily crypto natives.

What this means is that they don’t actually fully understand the ethos behind many cryptocurrencies, let alone how the technology actually works.

They want to invest in NFTs and this requires them to purchase cryptocurrency.

However, for most of them, cryptocurrency and the wallets they use are just a means to an end.

They are just tools.

Unfortunately, the vast majority of people are not very tech-savvy and there is even less awareness of the importance of cybersecurity.

Since they do not understand what is technically possible, they also do not immediately see the risks involved with certain actions on the internet.

If you mix all of this together with an increasing feeling of entitlement and a complete lack of willingness to be accountable for one’s own decisions, then you get lots of NFT investors who want to know whether there’s an OpenSea refund policy.

And the short and simple answer is: No, there is no such thing as an OpenSea refund policy.

OpenSea is merely a broker, a facilitator who connects buyers and sellers and receives a commission for each transaction.

Of course, OpenSea does have its own terms of service and these also include elements that deal with warranties and liability.

However, these deal with entirely different issues and are strictly not applicable to transactions that buyers and sellers have made themselves.

Please also bear in mind that this is not something that is specific to OpenSea, but rather something you’ll encounter with all OpenSea alternatives.

So before start searching for ways how to delete OpenSea accounts, make sure you understand that this is a general limitation.

What if You Get Hacked on OpenSea?

If you’ve been “hacked” on OpenSea, then in all likelihood it is because you either still had old active listings or you were the victim of a phishing attack. In both cases, it is highly unlikely that you will be able to get an OpenSea refund because the attacker effectively did not really hack OpenSea. The negligence is mostly the user’s own fault.

There have been a number of cases where the broader media landscape reported that OpenSea had been hacked and that several owners of BAYC had been deprived of their tokens.

First of all, it’s important to clarify that OpenSea was never actually hacked.

The term “hacked” is used very loosely nowadays in order to describe almost any sort of theft that happens online.

For the most part, these are not hacks but rather the result of malicious social engineering.

Social engineering basically means that someone was tricked into enabling someone else to steal something from them.

Smart contracts on the blockchain can’t just access your wallet and remove your NFTs and neither can OpenSea.

Everything that happens on the blockchain usually requires the wallet holder to approve something.

When you are simply sending cryptocurrency from one wallet to another, this will require your approval.

The same applies to purchases you make directly on OpenSea.

However, many actions on OpenSea and other dApps actually require blanket approvals and listings don’t always expire automatically.

And this opens up many avenues for malicious actors to exploit weaknesses in the system (note: the “system” involves you as well).

There are ways to prevent this and we urge everyone to learn how to use Revoke Cash to protect themselves.

So it begs the question: Should OpenSea refund users who acted negligently?

So the two main exploits that have happened on OpenSea are as follows:

Two Types of Attacks on OpenSea

Unless you’ve listed your NFT with an expiry date, your listing will remain active indefinitely until you cancel it.

The problem is that canceling a listing costs OpenSea gas fees.

A lot of users simply move their NFTs to a “vault” wallet using the OpenSea transfer NFT feature which not only adds a layer of protection but also “invalidates” the old listing and is much cheaper.

The problem is that when they transfer the NFT back to their regular wallet, the old “invalidated” listings are still active.

So, even though your Bored Ape may now be worth 100 ETH, your old listing from a couple of months ago at 2 ETH may still be active.

And all it takes is for someone to see that and buy the NFT at that price.

Some might argue that OpenSea should do a better job of highlighting this but the primary culprit here is still the user himself.

And therefore we don’t believe an OpenSea refund would be appropriate in this case.

So make sure you really know how to delist on OpenSea in order to avoid mistakes like these.

The other case of stolen NFTs did not involve old listings on OpenSea.

Instead, the thief used one of the older tricks in the bag: Phishing.

Phishing attacks usually from in the form of emails, where the attacker will pose as the original platform.

Most phishing attacks are amateurish but in other cases, they are very close to the real thing and can mislead people.

Users click on a link and eventually end up providing sensitive information which allows the attacker to access their accounts.

The same thing happened on OpenSea and many users accidentally confirmed transactions that they believed to be from OpenSea, when in fact they were from a malicious website.

The transaction they were approving essentially gave the attacker full access to their wallet and they were able to transfer everything out within an instant.

In all honesty, given that phishing emails really aren’t anything new, we do not believe an OpenSea refund is in order here.

The NFT market really is the wild west.

If you thought cryptocurrencies were risky, well then it’s time to buckle up because NFTs are even riskier.

It’s an unregulated market, blockchains are immutable and there is almost no legal recourse if you somehow lose your tokens.

Especially not if you lost them by your own negligence and lack of security measures.

There have been cases where those who lost their Bored Ape were compensated by OpenSea for the loss.

However, these were primarily people with significant reach on social media who posed a serious reputational risk to OpenSea.

There is no official OpenSea refund policy and therefore users should rather invest their energy in learning how to avoid these cases altogether. 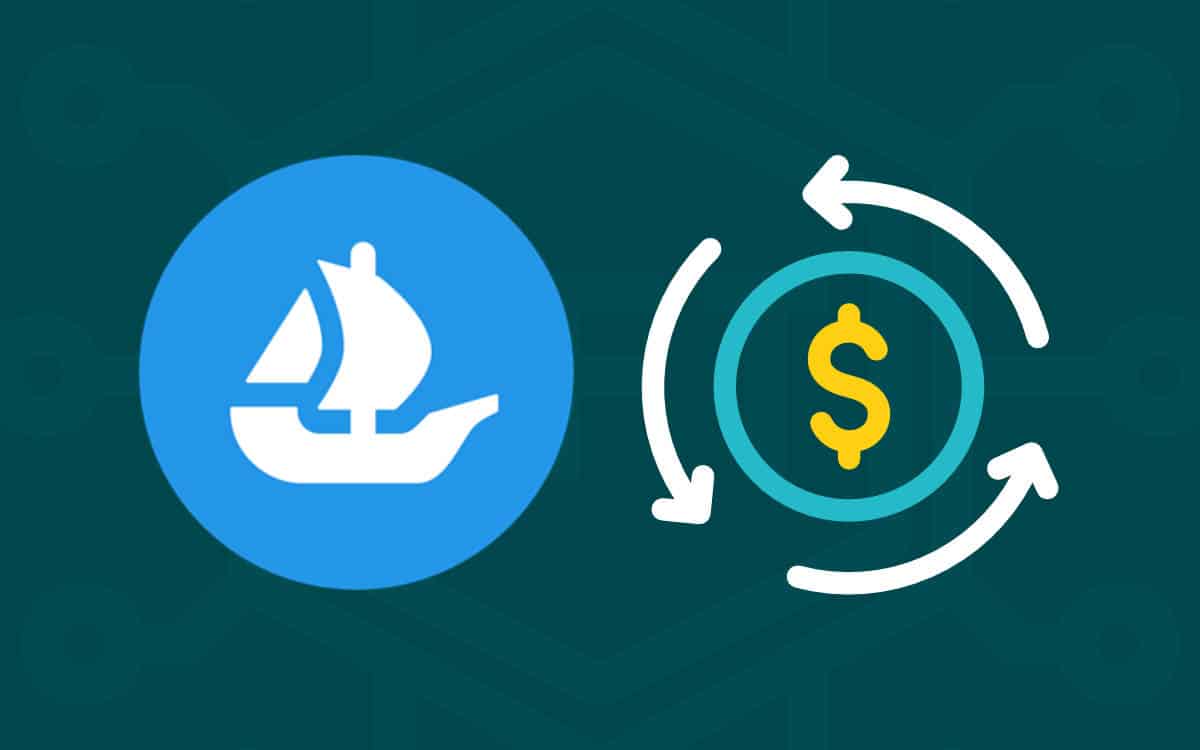