Dune Analytics API: Everything You Need to Know

Are you looking for detail on the Dune Analytics API?

Perhaps you recently discovered how powerful Dune Analytics is and now you’d love to integrate it into your newest project via an API?

Well, you’re clearly not alone because tons of people have been asking for a public Dune Analytics API that they can use.

In this guide, you’ll learn about Dune’s latest plans for a fully-fledged API as well as alternative solutions that are currently available.

Dune Analytics API: Everything You Need to Know
Here’s the answer. Great article by @ChrisHeidorn from @Tokenized_HQ here: https://tokenizedhq.com/dune-analytics-api/

Does Dune Analytics Have An API?

Dune Analytics currently does not have an official public API. The company is currently working on an API, however, no launch date has been communicated thus far.

Alright, so you’ve been playing around with Dune Analytics and simply love how easy it is to create meaningful analytics for just about any blockchain project out there.

If you’re a developer then it’s absolutely natural for you to check whether there is a public API.

After all, why reinvent the wheel?

Not only does an API open up tons of opportunities for smaller projects to build awesome tools.

It also allows Dune Analytics to expand its revenue streams beyond its own service.

Companies that integrate their systems with a Dune Analytics API are likely to become very sticky and lucrative customers.

Although there is no official public Dune Analytics API right now, the Dune Documentation confirms that the team is currently working on one.

If you’re interested in getting early access to an API key for the Dune Analytics API once it goes into beta, make sure you complete the API interest form.

This is no guarantee that you’ll be the first to get access, but it does help the team assess what sort of use cases they should consider while building the API.

Will There Be a Free Plan for the Dune Analytics API?

It is possible that free plans will have limited access to the Dune API once it is released. Advanced features, as well as projects requiring a large number of requests, will most likely have to purchase a paid plan.

Obviously, no one really knows what the terms will be once the Dune Analytics API is released.

However, we think it’s fair to assume that it will most likely not be free for power users.

We could imagine a very limited free plan that allows would allow you to play around with the API and test it in a prototype.

But let’s face it, most of the really useful APIs require some sort of paid plan.

There are a number of unofficial Dune APIs that access the same endpoints as the official Dune Analytics widgets that are used to share charts. However, they are not officially supported and only provide limited features.

Even though there is no public Dune Analytics API available right now, some unofficial solutions have surfaced recently.

From what we understand, these unofficial Dune Analytics API repositories don’t actually run the queries.

Instead, they simply fetch the query results from the backend.

In other words, they only allow you to retrieve the data for specific queries that you’ve already created inside your Dune Analytics account.

This is mainly possible because the Dune Analytics widget that allows you to embed charts and tables into other sites needs a way to retrieve the data.

So these unofficial Dune Analytics APIs are simply wrappers for the requests that are already being made.

The primary advantage of this is that it lets you pull the data of your queries on-the-fly and use it within your own apps.

There are currently 2 different repositories available:

Before we wrap up, let’s quickly address a few frequently asked questions about Dune Analytics.

Founded in 2018, Dune Analytics has become one of the most popular tools used by analysts in the blockchain industry.

Its public dashboards have become a hallmark and we’ve extensively covered some of the best Dune Analytics OpenSea dashboards as well as Dune STEPN dashboards that their community has created.

We believe Dune’s future is bright and a proper Dune Analytics API for professionals will go a long way in helping them cement their position. 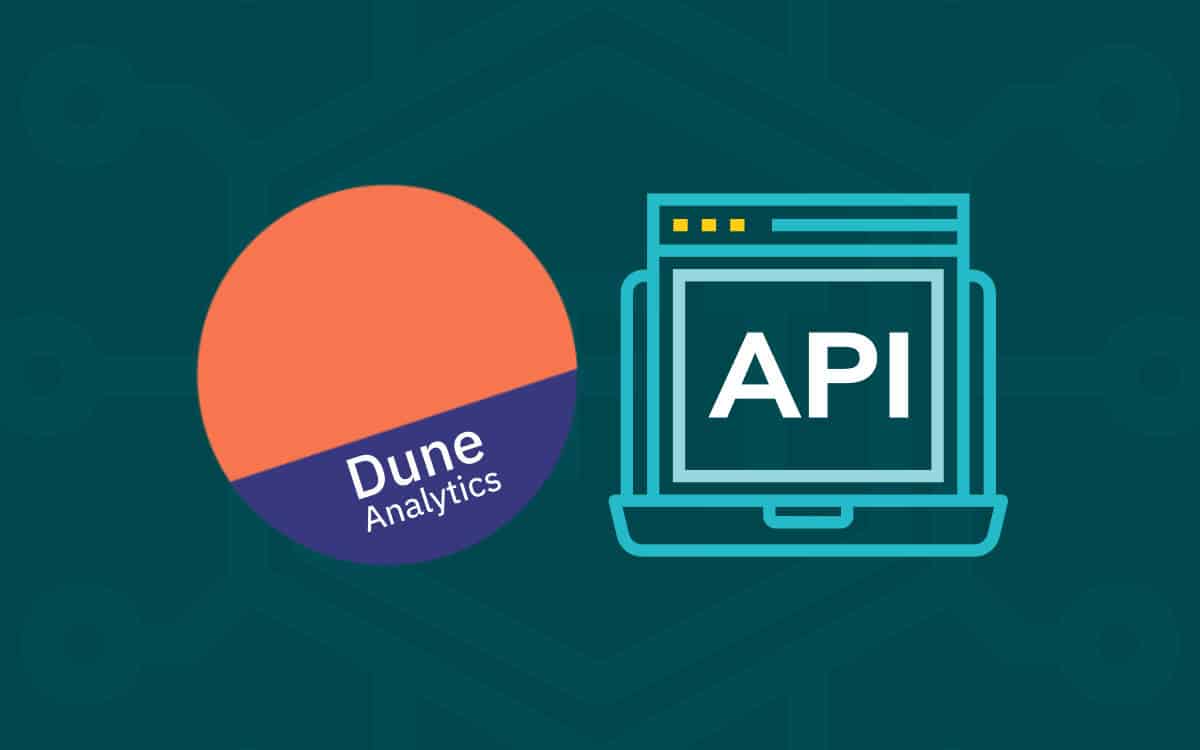