The Truth About NFT Pyramid Schemes

So you’re wondering whether NFT is a Pyramid Scheme?

Perhaps you’ve been reading a lot of comments on social media claiming that NFTs are just another huge Ponzi scheme?

It’s not the first time that people have claimed that a new technology that involves money is actually a pyramid scheme.

And to be honest, we totally understand why someone may come to that conclusion if they only had superficial knowledge of what is being done by a lot of NFT projects.

Of course, we are biased, but so are many other people who will happily tear down anything that involves any form of free-market or capitalism.

However, the most successful NFT project most certainly are not NFT pyramid schemes and are more comparable to some of the more successful cryptocurrencies of the past few years.

In this article, you’ll learn what pyramid schemes are and why do not believe that it is a fair assessment of the NFT industry at large.

What Is a Pyramid Scheme?

A pyramid scheme is an unsustainable business model that requires the constant recruitment of new investors by previous investors in order to pay for the returns that were promised to the next level up. Pyramid schemes are illegal in many countries. However, there are also many multi-level marketing schemes which are very similar to pyramid schemes, although they don’t fit exact legal definition and are therefore allowed to operate.

First of all, let’s clarify what pyramid schemes actually are.

These new members pay an upfront fee to those who enrolled before them.

Once the newly enrolled members recruit another set of members, a portion of the fee is pushed up the chain, all the way to the top.

Pyramid schemes require the lowest levels to remain wider than the upper ones, otherwise, the entire system collapses.

True pyramid schemes are actually illegal in many developed countries, however, there are multi-level marketing schemes that operate legally because they involve the sale of actual tangible goods and services.

Now, if we were only looking at so-called 10k PFP NFT projects then we could understand why some might come to the conclusion that the entire space is filled with NFT pyramid schemes.

But that’s a very one-dimensional assessment and it completely ignores many of the other use cases of NFTs.

Let’s have a closer look at why the allegation of NFT pyramid schemes is unjustified.

How Are NFTs Different From Pyramid Schemes?

While some type of NFT projects may have some similarities with multi-level marketing companies, they actually work very differently. Investing in a NFT PFP collection is a lot more like investing in a very early-stage startup that is publicly traded. Roadmaps are essentially just pitch decks and there is absolutely no guarantee of a return.

First of all, it’s important to note that NFTs are technically just another form of cryptocurrency.

They are only slightly different from traditional tokens since they adhere to the ERC-1155 or ERC-721 token standard of the Ethereum blockchain.

NFTs are limited, uniquely identifiable tokens that are recorded in an open ledger and all the transaction history is fully transparent to the world.

When you buy and sell NFTs you usually do so by interacting with the underlying smart contract of the NFT.

It’s important to note that smart contracts are self-fulfilling applications that run on the blockchain without the need for any 3rd parties.

Anyone can view the contents of a given smart contract and verify what it actually does.

This effectively makes it nearly impossible to hide the inner workings of a potential scam.

Obviously, if the founder of a project promised a certain outcome and then simply runs away with the money, then there isn’t much you can do.

However, this is not something that’s exclusive to NFT.

This could happen (and has happened) with large corporations as well.

2. Not All NFTs Are PFP Collections

Critics of NFTs have become overly infatuated with the massive success of PFP projects.

Granted, they are an easy target because they do share some superficial similarities with multi-level marketing schemes.

However, they only represent a segment of the market, so it’s a bit of a stretch to claim that all of NFT is a pyramid scheme.

There are real artists out there who are using NFTs in all the right ways to foster a community without the need for massive agencies and middlemen.

Then there are the game developers who are building real play-to-earn video games that not only provide entertainment to their users but also a means of generating income.

And let’s not forget projects such as FlyFish Club which are combining a real-life restaurant chain with members-only access that is governed by NFTs.

These are all NFT projects that bear absolutely no resemblance to an NFT pyramid scheme.

And even if we take another look at the PFP project space, you’ll quickly realize that some of the biggest and most successful NFT projects literally started as simple PFP projects and now generate millions of dollars in annual revenue (e.g. Bored Ape Yacht Club).

3. No One Is Recruiting New Members

One of the key elements of an NFT pyramid scheme would require token holders to constantly recruit new NFT buyers in order to pay themselves off.

However, that’s not how NFTs actually work.

Sure, the likelihood of someone re-selling their NFT increases as more new investors enter the market.

But that’s not at all guaranteed.

In fact, you will only be able to re-sell your NFT if the market actually believes that the project is actually building something valuable.

And if the price of the NFT does go up, it doesn’t necessarily have to be purchased by new holders.

Many investors continuously accumulate more and more tokens of the same project because they believe in the future of the project.

So NFTs are actually a lot more similar to investing in stocks than to some wild idea of an NFT pyramid scheme.

Obviously, everyone has a different idea of what utility actually means to them.

For others, the utility might be a membership in an exclusive online forum where they can spend time with like-minded people.

In some cases, the real-life utility is more obvious, like for example access to the VeeCon NFT conference if you hold a VeeFriend NFT.

And these are just some of the examples of how successful NFT projects are not just reducing themselves to cute artwork but rather working on entire business models to support the value of their tokens.

We’re talking about an NFT project that has partnered with global brands like Adidas.

Does that sound like an NFT pyramid scheme to you?

One of the reasons why many people have an issue with NFTs is because they are a tremendously risky asset class and they are also unregulated.

Classic cryptocurrency has had to deal with the same type of criticism for years and yet, it’s obviously taking over the world.

Is it all just a scam? Are these all just NFT pyramid schemes?

We will admit that especially amongst the PFP projects, there is a staggering amount of low-quality projects and fraudulent cash grabs.

However, amongst all of the questionable projects, there are also the gems.

And that’s why the NFT landscape is very similar to the world of early-stage startups.

The only difference is that their “shares” are not publicly traded on NFT marketplaces.

Most fail and some succeed.

That risk is usually borne by business angels and venture capital firms.

So, if they use NFTs as a funding mechanism, does that automatically make them an NFT pyramid scheme?

Retail investors aren’t used to taking on so much risk and they rarely understand how to diversify it.

And we suspect that this is one of the main reasons why NFTs have been getting so much hate.

People who claim that NFT is a pyramid scheme would probably also say that the stock market or the housing market are pyramid schemes. Most retail investors are not used to the extreme risks involved with startup investing. It’s relatively easy to confuse a high level of risk of failure with a scam, if you’re not used to being accountable for your own decisions.

While we understand why some people believe that NFTs are pyramid schemes, we strongly disagree.

By their standards, you could easily say the same about the real estate market, the stock market, and even most monetary systems.

Can you make money with NFTs? Yes, you can.

Should everyone start investing in NFTs without doing research? Absolutely not!

Is NFT a good investment? Maybe.

Will NFTs make you rich? Probably not, but you might get lucky.

Let’s face it, it’s just like any other new technology or industry with massive potential.

Greed takes over people’s minds in the short term.

And it’s also in the short term that most people get burnt (for various reasons).

However, from a long-term macro perspective, if you stick with the least risk assets within a new asset class and are willing to wait 5-10 years, then good things will usually happen.

Amazon and Bitcoin are just a few examples that come to mind.

Allegations of NFT pyramid schemes defrauding millions of people are just another installment of a recurring theme in history.

Technology scares the living sh** out of people because it changes how things work and what people believed to be true.

The world initially claimed that no one would ever need an automobile.

The same thing happened with the computer.

And for most people, the Internet was just a strange fad.

Along came social media and it changed our society forever.

Bitcoin was only used to buy drugs and it was the mother of all Ponzis.

And now NFTs are the next thing we’re supposed to hate.

We invite you to look at the writing on the wall and draw your own conclusions.

But we believe that NFTs are here to stay. 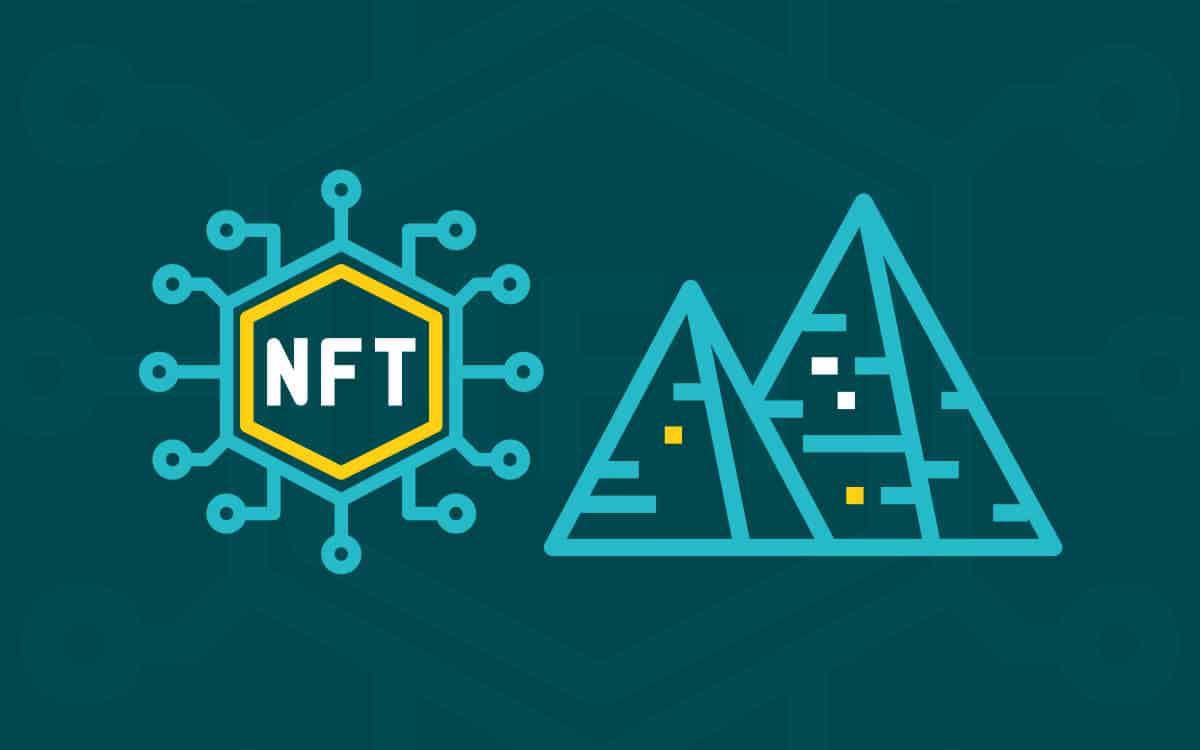