Looking for the perfect cooking hashtags for your next video?

Maybe you’ve just started posting meal preparation videos on YouTube, Instagram Reels, and TikTok, and now you want to know which cooking hashtags you should use?

Well, good thing you are here because so many people make the same mistakes over and over again and waste a lot of every by using the wrong hashtags on social media.

In this guide, you’ll learn why contextual hashtags are so important and how the best cooking hashtags are usually not those that are most popular.

For a complete list of all 50+ home cooking hashtags and their impact score, PLEASE READ THE FULL ARTICLE.

What Hashtags Should I Use for My Cooking Videos?

The most effective hashtags for home cooking and instructional cooking videos are those that describe exactly the type of food or meal being prepared. Search intent should be your primary focus.

Did you recently launch a cooking channel or YouTube because you just love to cook?

Or maybe you decided that Instagram Reels and TikTok are the better platforms for you because they are growing a lot faster?

Well, it doesn’t matter why you chose to create cooking content on social media, the key thing is that you started doing it.

In the early phase of building a social media profile, it’s incredibly important to start seeing results as early as possible.

Your ability to stick with it for the long haul will be highly dependent on your motivation and seeing results is the best form of motivation.

Now, you’re probably also wondering what sort of cooking hashtags or tags you should be using.

Most people instinctively try to find the most popular hashtags for their niche and think that this will increase their chances of success.

Well, unfortunately, that’s not true at all because picking the most popular cooking hashtags is like trying to compete with the world champions.

There’s simply too much competition.

But I’ve got good news for you.

And it’s your job to make sure that they can find your content as easily as possible.

By using very descriptive cooking hashtags, you dramatically increase your chances of being found.

These may not be the hashtags with the most search volume, but there is probably a lot less competition as well.

So, you stand a much better chance of getting attention than with a super generic hashtag such as #cookingvideo or #cookingclass.

Impact Score is a Better Metric for Hashtags

Hashtags for cooking videos are an excellent example of how the Impact Score is far more important than the superficial popularity of a particular hashtag. Focus on what the user wants, not on what everyone else is doing.

The metric that you should focus on most is what we like to call “Impact Score”.

The Impact Score of a hashtag is effectively the ratio between the number of posts that use the hashtag and the amount of search volume it gets every month.

Cooking hashtags with a high Impact Score get sufficient search volume to be considered relevant and aren’t overly competitive either.

Someone who searches for #CookingRibs obviously wants to see videos about how to cook ribs.

You can probably already see where this is going.

Using highly contextual and descriptive hashtags will give you a much better chance of being found on social media.

These hashtags can be used for just about any social media platform that relies on video content.

Although hashtags for TikTok and Instagram Reels hashtags might be slightly different than those that are predominantly used on YouTube, you can still use them on all 3 platforms.

Although you may have understood everything we just said, you still might think it’s too much work.

Or your own past experiences with similar strategies were never quite successful.

Either way, if you just want a bunch of generic food hashtags about cooking that you can copy and paste, then feel free to use the selection we’ve prepared for you below.

The cooking and meal preparation niche is primarily driven by a “problem-solution” dynamic.

The problem is that someone wants instructions on how to cook a particular meal or type of food.

The solution is the video in which you demonstrate how it’s done.

Search intent is absolutely critical in this space and that is why you should focus your efforts on hyper-descriptive home cooking hashtags. 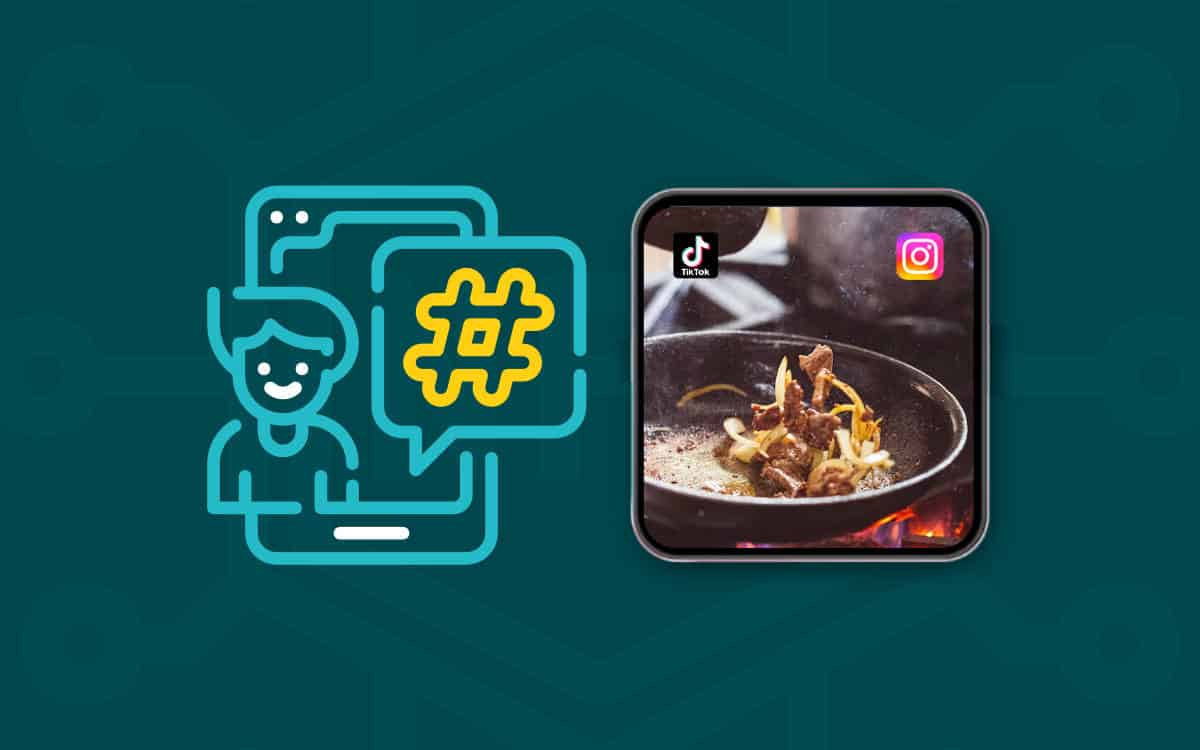