Car NFTs: Everything You Need to Know in 2022

Have you ever wondered what a car NFT is?

Or maybe you’ve heard that some car manufacturers have started selling NFTs and you want to find out more?

We’ve done some digging and found that many automotive companies are experimenting with very different approaches to NFTs.

In this guide, we’ll go into detail on the potential future of the NFTs in the automotive industry and show you some of the most promising projects.

We’ll also quickly cover some NFT projects which have chosen to focus on cars but which don’t seem to have any official association with actual car manufacturers.

Anyway, let’s get right to it.

Car NFTs: Everything You Need to Know in 2022
Here’s the answer. Great article by @ChrisHeidorn from @Tokenized_HQ here: https://tokenizedhq.com/car-nft/

What Is a Car NFT?

NFTs are unique digital assets that live on the blockchain. Their inherent rarity makes them particularly interesting for luxury brands, including so-called car NFTs from luxury manufacturers. However, because the blockchain is tamper-proof, automotive NFTs may also have a future in the collection of historical data which is specific to a particular vehicle.

Non-fungible tokens, or NFTs for short, are unique digital assets that live on the blockchain.

They are tamper-proof and uniquely identifiable, which means that while someone may attempt to replicate them, there is always a way to tell an original from its copy.

Car manufacturers have been amongst the first companies to start experimenting with NFTs in their products.

Some of them have primarily focused on the potential publicity value of NFTs and have rushed to announce their plans.

It’s not surprising that it’s mostly the luxury brands that have been quick to pounce on the opportunity.

However, there are also examples of manufacturers who have put effort into researching how NFTs might also help fix real-world problems that exist in the automotive space.

What this tells us is that car companies are taking NFTs very seriously and automative NFTs will most likely have a future in some shape or form.

How Car Brands Are Using NFTs

Manufacturers from all over the world are experimenting with car NFTs. Some see it as an excellent opportunity for a marketing stunt and tons of free press, while others are aiming to create brand experiences for their most loyal fans. Mainstream car brands will most likely focus on the utility that NFT certificates could introduce in the secondary car market.

By now it’s become quite clear that many popular consumer brands believe that NFTs may be an opportunity that they should not miss out on.

Many luxury brands, but also household names, have been making headlines in recent months with regards to their ambitions around NFTs.

For many of these companies, NFTs have the potential to fundamentally change how they interact with and monetize, but also reward their most loyal fans.

Nevertheless, there is the potential for some very real utility around NFTs for car manufacturers.

The only reason we haven’t seen many examples of these yet is due to the fact that it involves significantly more research and development.

Much of which is confidential for competitive reasons.

Let’s have a look at some examples of how car NFTs might be introduced into the market.

NFTs as a Marketing Stunt

In late January 2022, Lamborghini announced the release of its first NFT.

While it’s not clear whether there is a particular utility to the NFT, it definitely fits the brand’s image.

From the looks of it, Lamborghini’s NFT drop is literally just an image created by the Swiss artist Fabian Oefner.

The image shows a Lamborghini breaking into thousands of tiny pieces as it races towards outer space like a rocket ship.

As absurd as it may sound, it’s totally on-brand.

Bear in mind that Lamborghinis are one of the most omnipresent memes within the crypto community.

You’ll frequently see people write “wen lambo” and “to the moon”, which is a reference to many crypto investors who are waiting to finally become rich off their crypto investments.

So rich that they can easily afford a Lamborghini.

The reason why the entire release falls into the “marketing stunt” category is largely due to another even more absurd detail.

Lamborghini is also selling a set of carbon fiber “space keys” that they sent to the International Space Station in 2020 for “research purposes”.

Either way, it’s obviously all quite hilarious.

Ferrari was amongst the first luxury car manufacturers to announce that they are planning to create NFTs.

They are also known for being very open towards the crypto industry, always looking for ways to find solutions to the major criticisms of blockchain technology: energy consumption.

While not everyone may be able to afford a Ferrari, its fan base spans the entire globe and they love to own Ferrari merchandise.

A Ferrari NFT could become a super-exclusive membership that provides access to special events and experiences.

The only way to participate in these events is by holding a Ferrari NFT.

You might also be able to unlock other benefits, similar to what you can do with OpenSea unlockable content NFTs.

Unlike most existing memberships, NFTs can easily be sold to another person.

If such a Ferrari club membership becomes a sought-after asset, early “investors” could potentially make a fortune on the secondary market.

NFTs as Proof of Ownership

In 2021 Nissan Canada made the headlines when it announced that it would be auctioning off an NFT featuring artwork of the GT-R created by Alex McLeod.

The reserve price of the auction was set to $220,000, which may seem a bit high for a piece of digital art.

However, it just so happens that the NFT comes with a “free” Nissan GT-R as well.

So technically they were auctioning off a car and the NFT was the “extra”.

It was originally reported that the NFT sold for $2.3 million but the bid turned out to be invalid, which is why it was eventually sold at its reserve price.

Once again, as much as this might fall into the category of absurd “marketing stunts”, it does highlight something that may have real utility to some people.

Imagine you wanted to prove to someone that you actually owned a supercar.

If every car came with an NFT as a certificate of ownership, then it would be a lot less difficult for you to prove to another person that you are filthy rich.

Now, obviously, this is “utility” which is somewhat limited to the world of the ultra-rich.

Nevertheless, it showcases how NFTs could also work for more regular cars.

This brings us to the fourth example of car NFTs might shape the future.

In February 2022 Alfa Romeo announced that its new SUV (Alfa Romeo Tonale) will come with a digital NFT certificate.

What may sound like a marketing stunt at first glance actually has utility in the real world.

If the owner of the car chooses to opt-in, the NFT will record vehicle data, including whether it has been serviced or not.

An NFT certificate could provide additional data and credibility around the value of a particular car.

And if you take it one step further, it could potentially also be used to prove that a vehicle was originally owned by a particular person.

Imagine you purchased a car that was owned by someone who eventually went on to become a celebrity at some point.

You would be able to prove it and it would considerably increase the market value of your car.

What Car Manufacturers Are Experimenting With NFTs?

Public records show that at least a dozen companies are officially experimenting with car NFTs in some shape or form. These include Ferrari, Lamborghini, Alfa Romeo, Nissan, Audi, Porsche, and many more.

It’s unclear how many companies are actually working on NFTs in their R&D departments.

While it’s safe to assume that the majority of research and development departments have already been instructed to identify ways in which NFTs can be useful, most of it is probably confidential.

The most prominent examples we know of are from luxury brands and supercars.

Here is a quick list of the manufacturers which we know are already working on car NFTs in some shape or form:

Other NFT Projects Not Linked to Actual Car Manufacturers

While this article is primarily about how real car manufacturers are using car NFTs in their products, there are a number of NFT projects which are focused on cars.

That being said, we’d like to point out that none of them are affiliated with any real car brands.

Some of these projects are essentially just collectible trading cards and it’s unclear whether any of the brands they are using are actually licensed.

Other projects have plans to create blockchain-based games which use NFTs and were previously called NFT crypto cars.

As with all anonymous projects like these, please make sure you do your own research and conduct proper due diligence before you engage with any of them.

Here are the 3 projects we currently know of:

Auto manufacturers have been making tons of headlines with their car NFTs.

It comes as no surprise that most of them are from luxury brands that live on how their brand is perceived.

Sometimes it’s about innovation and in other cases, it’s all about exclusivity.

What’s become clear though, is the fact that most if not all car automakers are working on integrating NFTs “under the hood” (yes, pun intended).

Alfa Romeo’s NFT certificate is just the tip of the iceberg and the majority of other manufacturers are probably keeping their plans secret.

Don’t be too quick to dismiss the real-life utility of NFTs.

It’s not all just about pretty pictures and gambling, and the NFT market size is growing by the day. 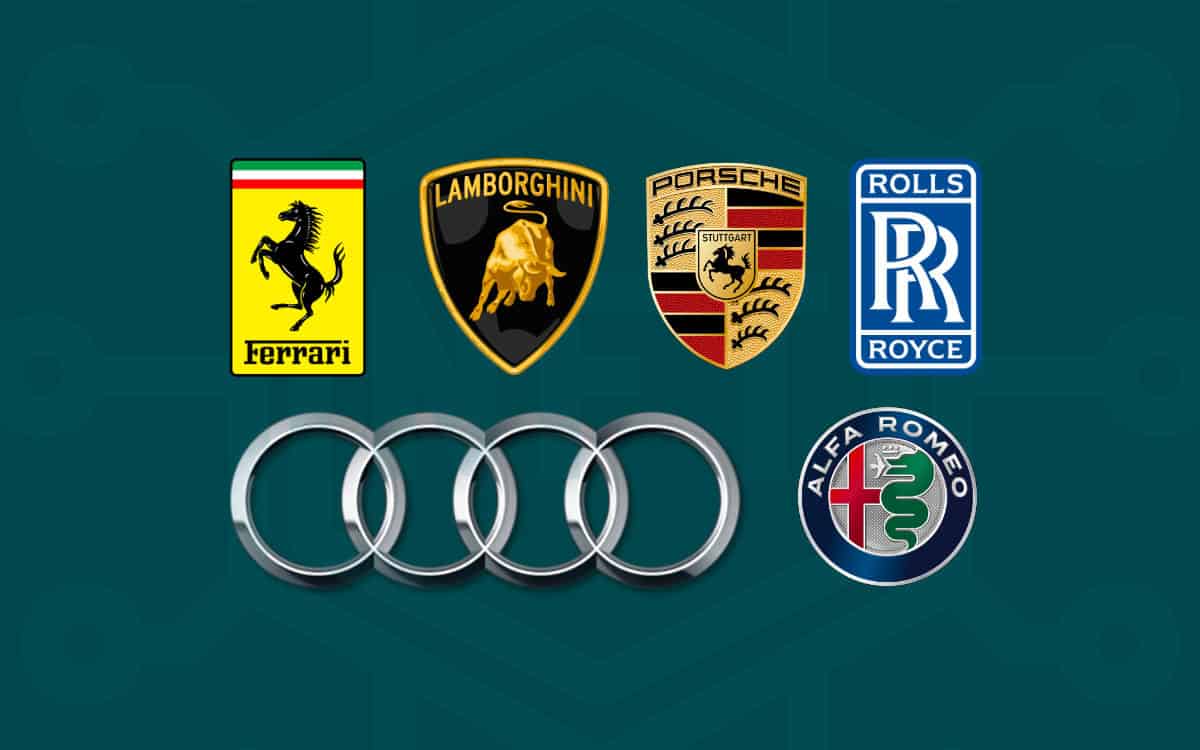