Solved: How Discord Quotes Work in 2022

Want to know how to quote someone on Discord?

Maybe you’ve recently joined your first set of Discord channels and because you’re still relatively new to the platform, you have no idea how Discord quotes work?

Well, don’t worry, because you’re not the only one who’s struggling with the concept of how to quote on Discord.

In this guide, you’ll learn 5 different methods on how to correctly quote Discord messages.

For step-by-step guides on how to correctly use Discord quotes, PLEASE READ THE FULL ARTICLE.

Why Do Discord Quotes Even Matter?

Discord channels are some of the most chaotic chats that you’ve ever seen, with an atmosphere that is very similar to when IRC was very popular. Discord quotes make it considerably easier to follow a particular conversation by providing structure and context to the chat history.

Since you’ve found your way to this article, we probably don’t need to explain to you why knowing how to quote in Discord is important.

But for someone who isn’t necessarily familiar with how Discord servers work, being able to quote in Discord may seem trivial at first.

However, in reality, it isn’t trivial at all.

Ever since the pandemic forced millions of people to work from home, work-focused messaging systems such as Slack or Microsoft teams have become omnipresent.

Something that originally felt like it was exclusive to the tech industry had suddenly become the new normal for many people.

So it’s not surprising that your average office worker would think that Discord is effectively the same thing.

Well, you know very well that this is not the case.

Discord servers are some of the most chaotic places you’ve ever seen and it’s difficult to imagine how anyone would be able to maintain a proper discussion there.

Like all things, it takes some getting used to but it also comes down to knowing how to properly use discord quotes.

If you know how to quote specific messages or format text as quotations, it becomes a lot easier to follow a conversation on Discord.

In the next section, we’re going to show you 5 different ways how you can quote in Discord and we’ll explain it all step-by-step.

5 Methods on How to Quote on Discord

In the next few sections, we’re going to introduce you to 5 different variations of how you can create Discord quotes.

Not every method will be appropriate for every situation.

Sometimes you’ll want to quote Discord messages from the chat and in other cases, you simply want to illustrate that a portion of text is a quote from somewhere else.

Once you have a good grasp of each and every method, you’re overall Discord experience should greatly improve.

The most common and also most popular option for quoting another person’s message on Discord is the “Reply” feature.

One of the challenges of conversing inside a very active channel is the constant stream of new messages that are usually unrelated to your specific conversation.

This can make it particularly difficult to notice when someone else is responding to one of your messages.

Especially if your original message is a bit older and therefore no longer in the line of sight.

That’s Discord introduced the “Reply” feature, which highlights the original message just above your reply text.

It also sends a notification to the person you are replying and you can even click on the “quoted” message and Discord will take you straight to the original location in the chat history.

Here’s how you can quote Discord messages with a reply:

And that’s it, it’s really that simple.

The next method is slightly different and not necessarily suitable for keeping track of a longer conversation on a Discord channel.

Instead, single-line Discord quotes essentially allow you to format a certain part of your message in a way that makes it clear that you are quoting text.

Since you’re not necessarily quoting a specific person from the Discord server, there’s no reference to any users or older messages.

The text is simply displayed as a block quote in Discord you can add text as commentary.

Here’s how you can use single-line quoting in Discord:

While single-line quoting is already very useful, it’s not particularly great when the text you want to quote requires line breaks.

A single-line quote will literally only display the very first line of your text as a Discord quote.

If you want to quote an entire paragraph in Discord, you should rather use multi-line quoting.

Multi-line Discord quotes effectively allow you to switch in and out of a “quoting mode”.

Here’s how it works in detail:

CAREFUL: Multi-line Discord quotes work differently on mobile and desktop devices. On the desktop version of Discord, single-line (“>”) and multi-line (“>>>”) quotes work exactly the same way. And line breaks can only be added by hitting “Shift + Enter”.

Another popular way of quoting on Discord is the use of so-called “code blocks”.

Code blocks are very common among developers who use them to display sections of code within a broader text.

Text that is encapsulated within a code block is usually formatted in a common programming font and also looks like it’s inside a box.

You can use code blocks to quote specific words or strings of text within a sentence or paragraph, without quoting the entire message.

Similar to how single and multi-line quoting works, you can also use three backticks (“`) to create a multi-line code block.

Finally, if you manage your own Discord server, installing a Discord quote bot might be a good option as well.

Discord quote bots effectively replicate a lot of the functionality provided by the “Reply” function, because Discord originally didn’t support this feature.

Some people still prefer using Discord quote bots simply because they like the formatting better.

Here are 2 of the most popular quote bots on Github:

We recommend that you have a closer look at the features of each one of these Discord quote bots.

Installing and managing these bots is usually relatively straightforward, although it seems that Citador is the preferred choice if you like simple UIs.

If you haven’t done anything like this before, you’ll probably have to enable Discord Developer Mode before any of the above will work.

But we suspect that the installation instructions will clarify that.

Before we close out this guide, let’s quickly address some of the most common questions related to Discord quotes.

What is the difference between a quote and a reply?

When you quote text in Discord, it is not directly linked to a specific user or message in the chat history. You can format any piece of text as a quote. Replies are direct responses to a specific message and person and are formatted in a way that makes it easier to follow the conversation inside Discord.

Why can I use code blocks in Discord?

You are most likely not using the correct character or symbol. Backticks (`) can be confusing because they look very similar to an apostrophe (‘). A backtick is slightly slanted to the left. Depending on your keyboard layout, the keys for backticks are usually positioned at the top left or top right of your keyboard.

How can I address a specific user in a Discord chat?

If your message relates to a specific message from a user, you can use the “reply” feature to address them directly. Alternatively, you can also use the @ symbol to mention a user within the channel.

Since Discord has its origins in the gaming industry, it’s not surprising that they tend to be more chaotic than “business-oriented” Slack channels.

Unfortunately, this makes it rather challenging to follow a conversation, making the ability to quote in Discord all the more relevant.

The methods listed above are effective ways to regain control over how you communicate with other users. 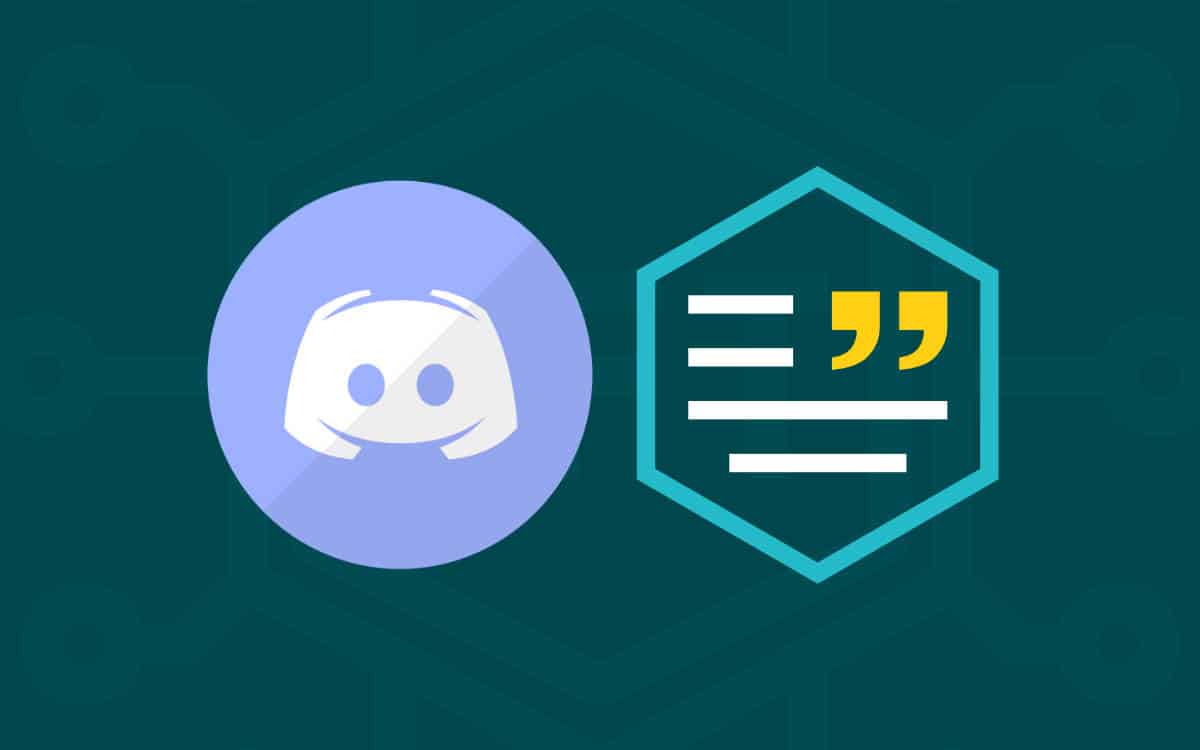